Architecture
The St. Agnes Church property included a church, school, rectory and convent. Architecture firm Van Leyen, Schilling, Keough, and Reynolds designed all of the buildings on site in the Neo-Gothic style. The school was constructed in 1916 and the convent was completed the following year. The cornerstone for the church was laid in 1922. The fifteen hundred-seat sanctuary was dedicated on June 1st of 1924. All of the structures were built of red brick and limestone. The sanctuary also featured valuable glazed tiles, many of which have now been stolen. 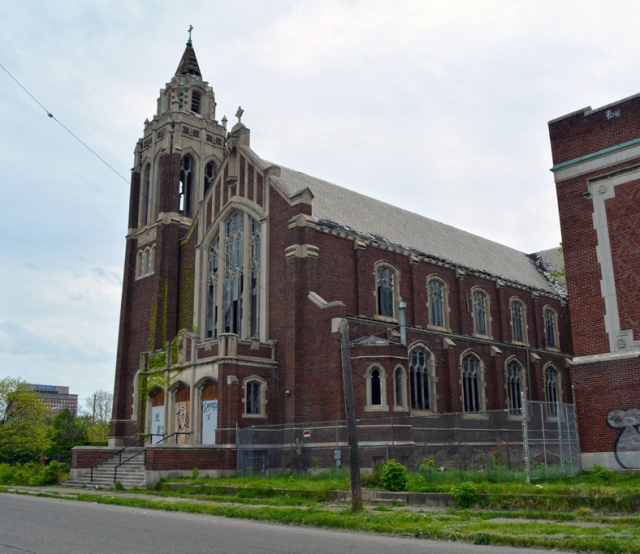 Church History
Poor St. Agnes has gone downhill fast since being abandoned. However, it wasn’t always this way. The church’s early days began like most of the church’s I’ve researched. Bishop John Foley purchased the land for the church in 1910 during a period of municipal expansion. The bishop rightly predicted that it was only a matter of time before the area would need a church.

The congregation of St Agnes was founded in 1914 and began worshiping in a frame house two blocks from the current church site. It wasn’t long before the congregation grew too large for its initial space and moved to a temporary church with a capacity for two hundred parishioners. The congregation remained there while their permanent sanctuary was being built.

After moving into their permanent sanctuary, the church thrived, growing to “1,600 hundred families, three priests, 22 nuns and a girl’s high school with 180 students by 1964”.[Detroit Urbex] However, the neighborhood began a precipitous decline in the latter part of the 1960s. A raid on a local bar sparked a confrontation between police and the community that devolved into a riot that led to the destruction of much of the neighborhood. Although the church was spared from the destruction, the damage to the neighborhood was permanent. Patronage to the church’s facilities steadily declined.

In 1989 St. Agnes merged with local St. Theresa Avila and the church was renamed to Martyrs of Uganda Catholic Church. The Martyrs of Uganda were African missionaries that refused to renounce their faith and were subsequently executed. The renaming was an effort to reflect the changing demographics of the church’s parishioners. In spite of the merger, as well as efforts by the church to attract new members, attendance continued to decline. The school closed in 2000. The church was shuttered in 2006 and subsequently sold in 2007.

After Abandonment
Prior to selling the church, the Archdiocese removed the pews and replaced the stained glass windows with acrylic panes. The congregation that purchased the church never occupied the space and allowed the buildings to decay. Without maintenance, the church succumbed to the elements, as well as thieves and vandals. Scrappers stole the organ pipes, tiles were removed, walls were smashed and water damage has caused portions of the ceiling to fall. The church was sold to a real-estate developer in 2012 and temporarily secured; however, the damage was done. What remains is little more than a haunting reminder of what the church once was.

Exploration
The current state of the church has attracted an interesting menagerie of visitors. In addition to graffiti artists, the buildings have been used for at least one wedding and a Google image search yields quiet a few model shoots. When I entered the sanctuary a photo shoot of kids in full World of Warcraft regalia was in progress. It made for an interesting first foray into Detroit urban exploration. If you are interested in doing your own photo shoot here, a word of warning, a local source informed me that the police are cracking down on trespassers at this location.

For more of my photos of St. Agnes visit my St. Agnes Flickr Album.

To see photos of the rapid progression of decay over the course of 3 years check out St. Agnes Church – Now and Then at Detroit Urbex.